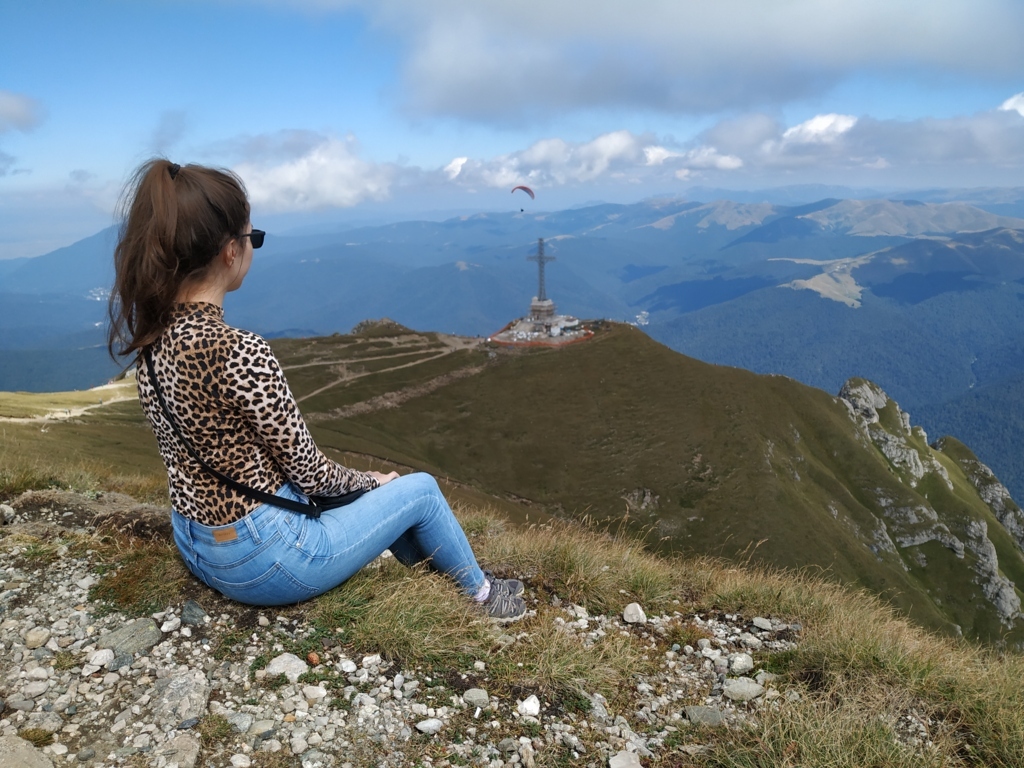 It was last September that I discovered the real beauty of the Romanian mountain area and I got to visit some of the most beautiful and popular tourist attractions in the Bucegi Mountains. In 2020, these two places that I am going to write about were overflooded by Romanians because they represented the perfect escape from the busy city life, particularly in the pandemic context. However, I think these places are best to be seen anytime between mid-spring and mid-autumn.

As you’ve figured out from the title, I will be telling you about Zănoaga Gorges – Scropoasa Lake – 7 Springs Waterfall and Babele – Heroes’ Cross on Caraiman Peak in Bucegi Mountains.

I saw all of them on a 2-day trip from Bucharest, but you can adjust the itinerary as you please.

How to reach there

Search for “Zănoaga Camping” on Waze or Google maps and follow the way. From Bucharest, there is about 160 km, which takes about 2.5 h depending on the traffic. Zănoaga Camping is the starting and ending point for this track.

Duration: about 4 h (depending on how many breaks you have or how much time you spend photographing)

Zănoaga Gorges are located in Bucegi Mountains, on the Ialomița River Valley and are part of the Zănoaga Nature Reserve. The journey starts at Zănoaga Camping and if you follow the blue cross marking you will reach Scropoasa lake. You have to cross the Ialomița river a few times, either using a wooden bridge or big stones and logs, which can be a balancing exercise for the uninitiated.  In the beginning, it looks like this: 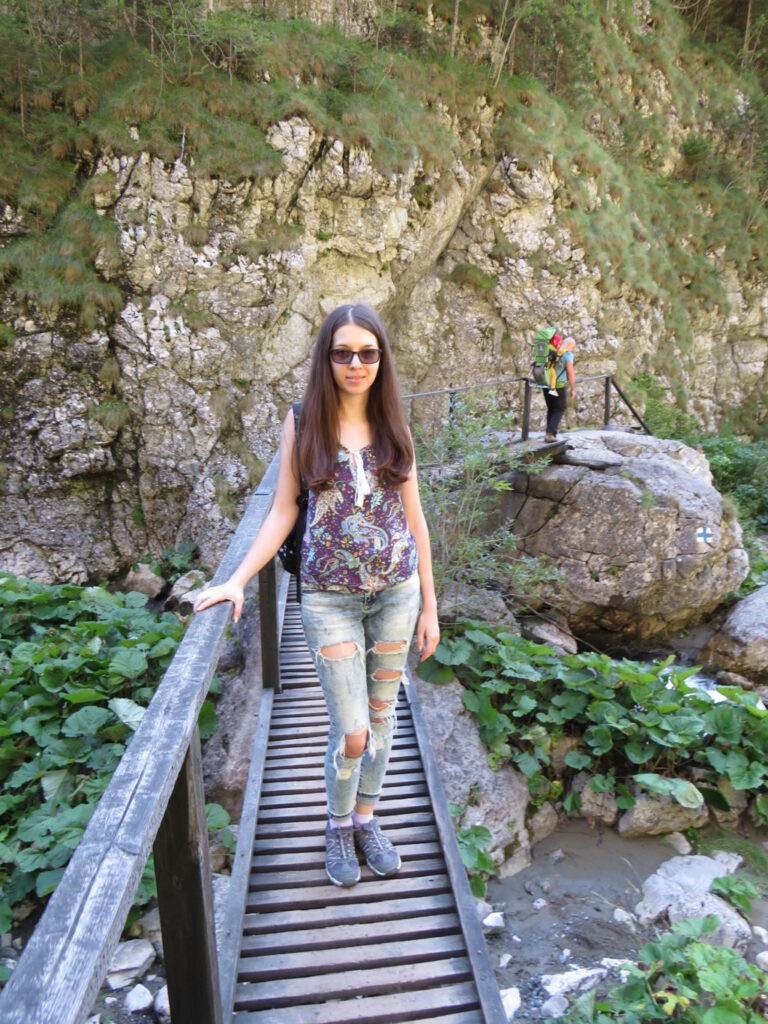 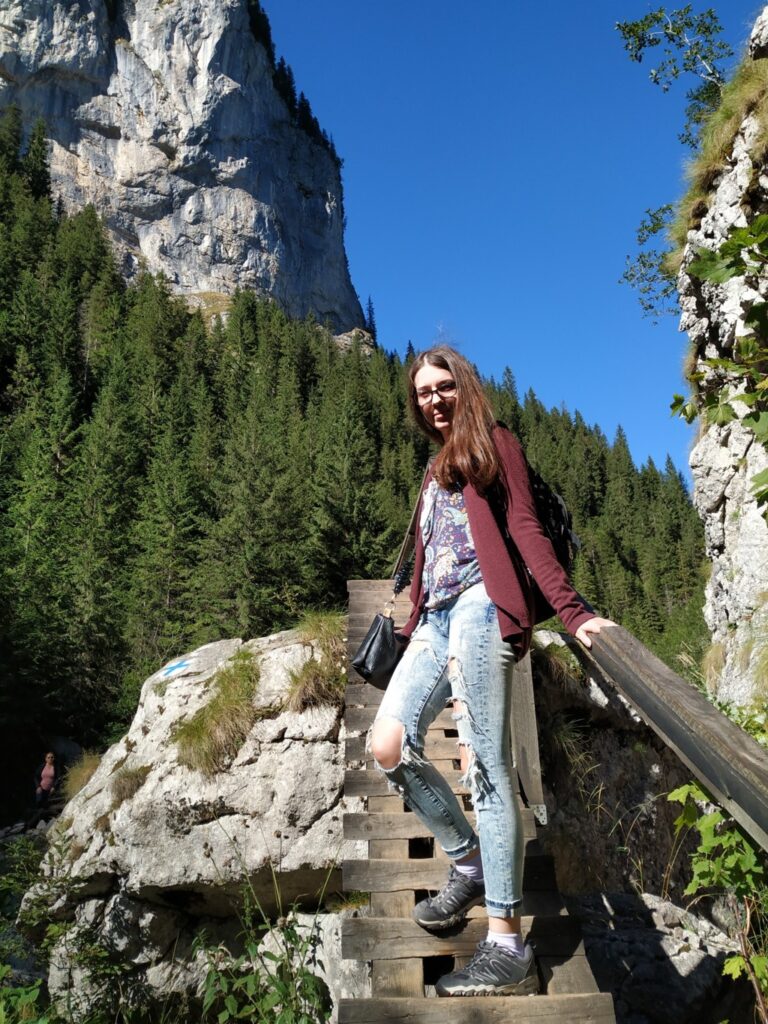 And then it gets a bit more difficult and interesting as the track takes you into the forest and there are some rocky parts as well. Although this is considered an easy track and I saw people wearing sneakers or even sandals, it is still important that you have proper mountain shoes especially if you go there after rain because the rocks can be quite slippery.

The landscape is stunning, nature all around you – forest, river, cliffs, fresh breeze, birds twitter and it’s really nice to hike through the woods and take photos here and there. 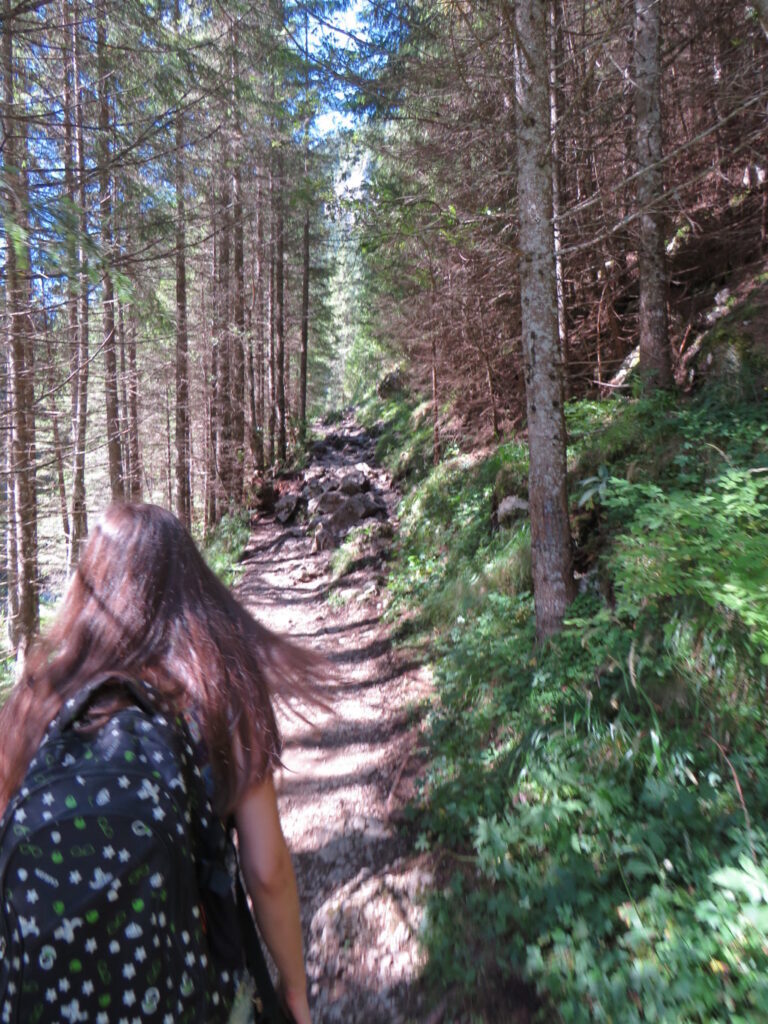 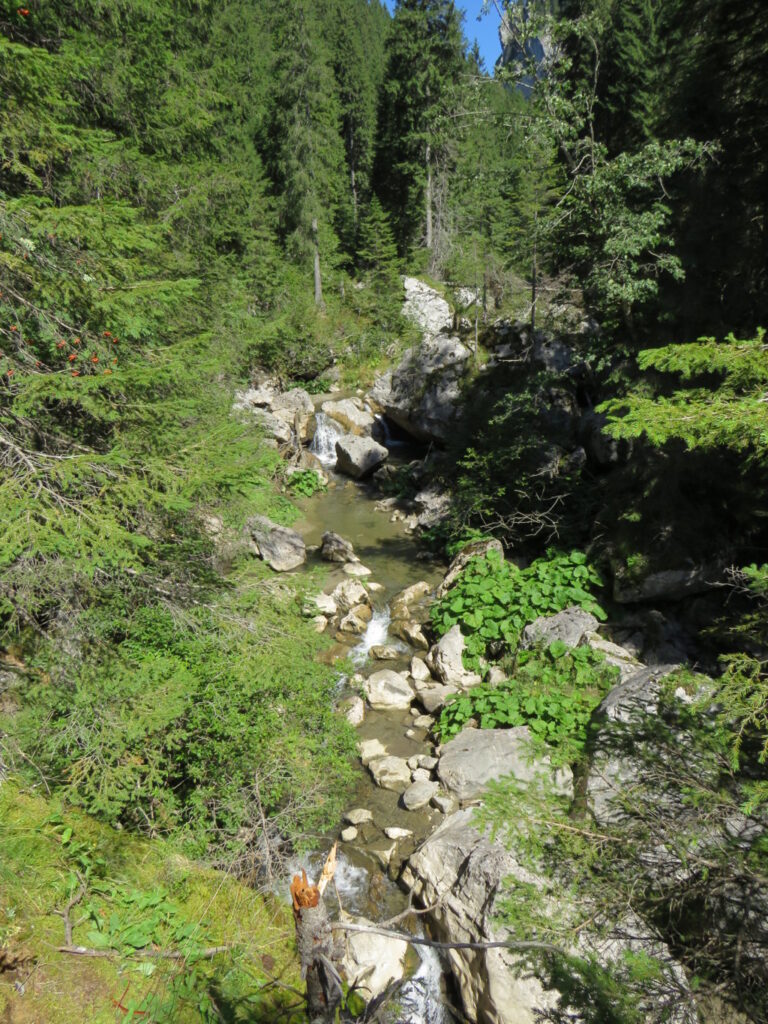 After you exit the gorges, you reach a meadow and some buildings. The right path will take you to Scropoasa Lake (I think it’s a 20-30 min walk if I remember well), whereas the left path takes you to the 7 Springs Waterfall (about 10 min).

Scropoasa Lake is an artificial dam lake built in 1929 for hydropower purposes. On most of the photos found on the Internet, the lake is shown to have an incredible turquoise colour and I believe this is what mostly attracts so many tourists there. There is a particularly photogenic spot by the lake where people queue to take a photo. The reality, however, is quite different. The lake is rather pale green and doesn’t look as gorgeous as you might imagine, but it’s still a nice view to see. The below photos have no filter: 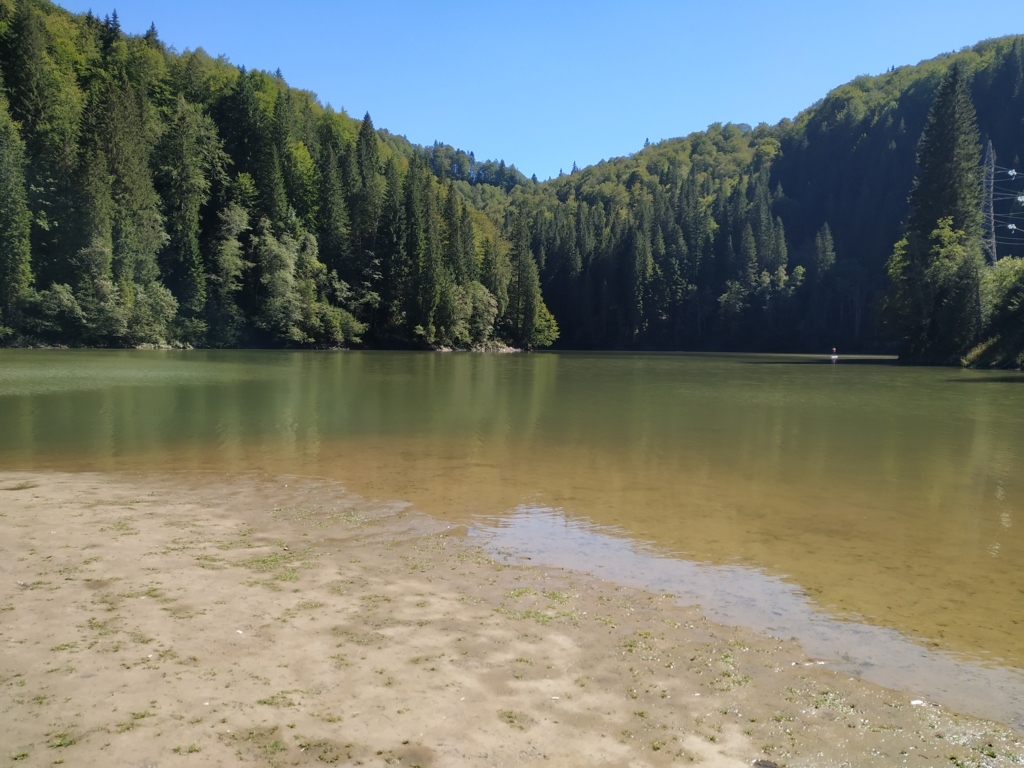 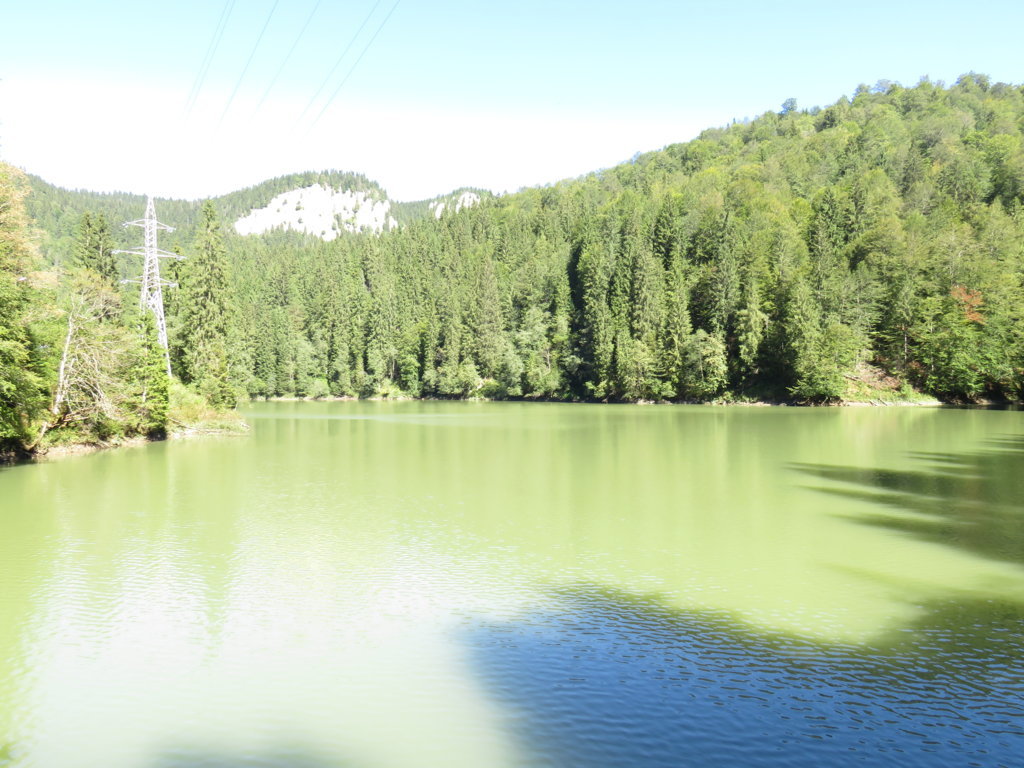 The 7 Springs Waterfall is considered to have the purest and cleanest water in the world, as many microbiological studies have been performed on the water. There are also a few stories/legends associated with the waterfall due to the water quality and the amazing properties it is believed to have and so the waterfall is called “The Sacred Spring of Zalmoxe (the God of the Dacians)” or “The Immortality Spring of Ceaușescu”. I have to admit that I expected the 7 Springs Waterfall to be more impressive, but the same as it happened with the lake, the photos I had seen before on the Internet were deceiving and didn’t reflect the reality. 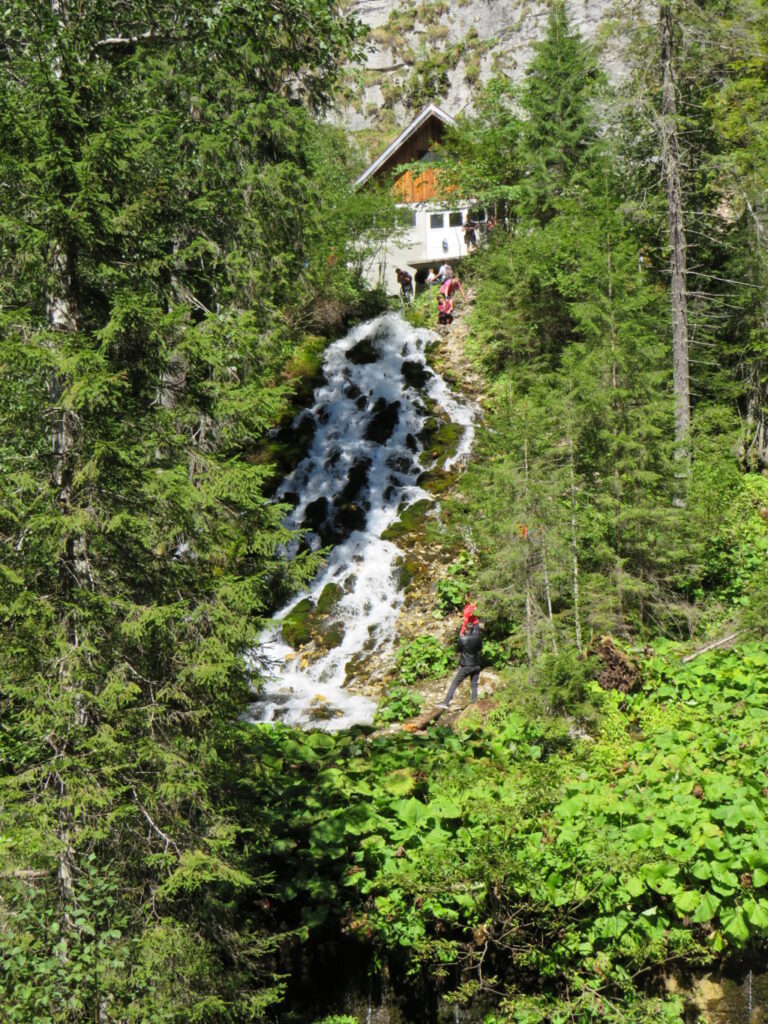 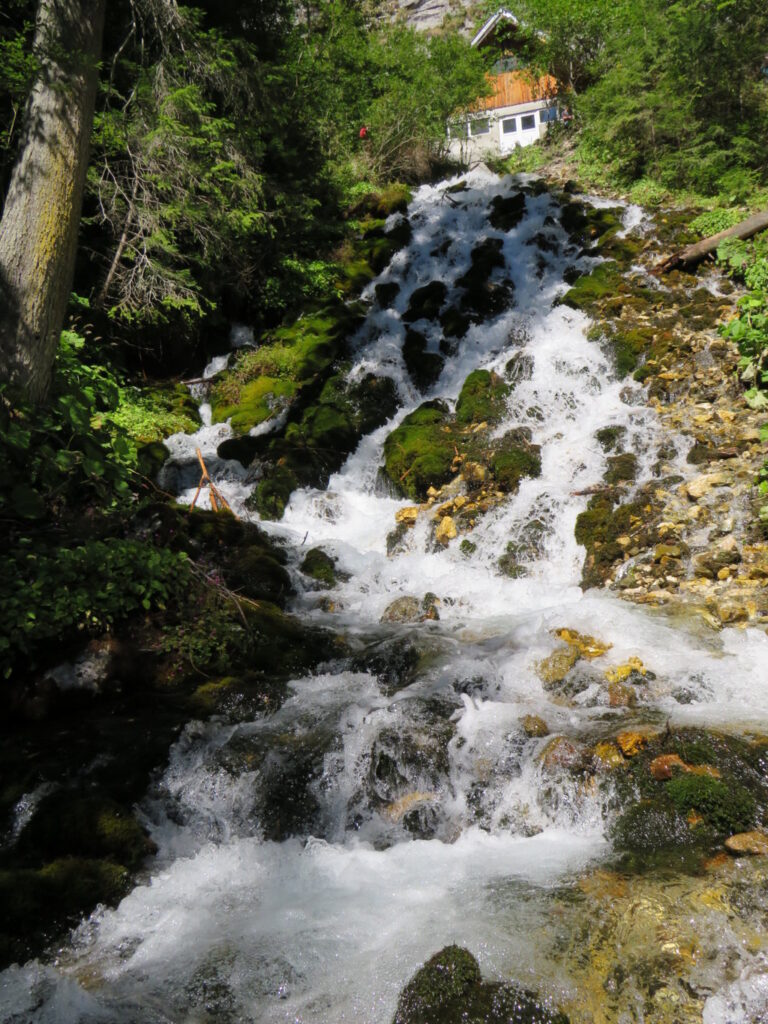 The way back to Zănoaga Camping seems much shorter and easier. It takes about 1 h.

All in all, even if this hiking track is maybe overrated and very crowded at weekends, it was a great hiking experience for me, one that I needed so much because it had been a long time since I had gone hiking. I was not in the best shape physically, but still, it was an easy track even for me, something that prepared me a little bit for what was to come next.

Difficulty: easy, if you take the cable car; medium, if you hike

Duration: I would say about 6 h in total, if all by foot, for beginners. An experienced hiker would probably do it in 4 hours

As I told you, the trail Zănoaga Gorges – Scropoasa Lake – 7 Springs Waterfall was just the warming up for what was about to come the following day. We wanted to reach the Bucegi Plateau, where the famous Babele and the Sphinx are. The easy way is to take the cable car either from Bușteni or Peștera and in a few minutes you are up and ready to wander the plateau. I was very excited to try a new hiking trail, so I decided not to be helped by the cable car, a decision that somehow I regretted later.

So we drove to Peștera cable car, parked there and then headed to Babele following the blue cross marking, a trail of about 3 km that is supposed to take about 2 h or less, but I think it took at least 2.5 h. 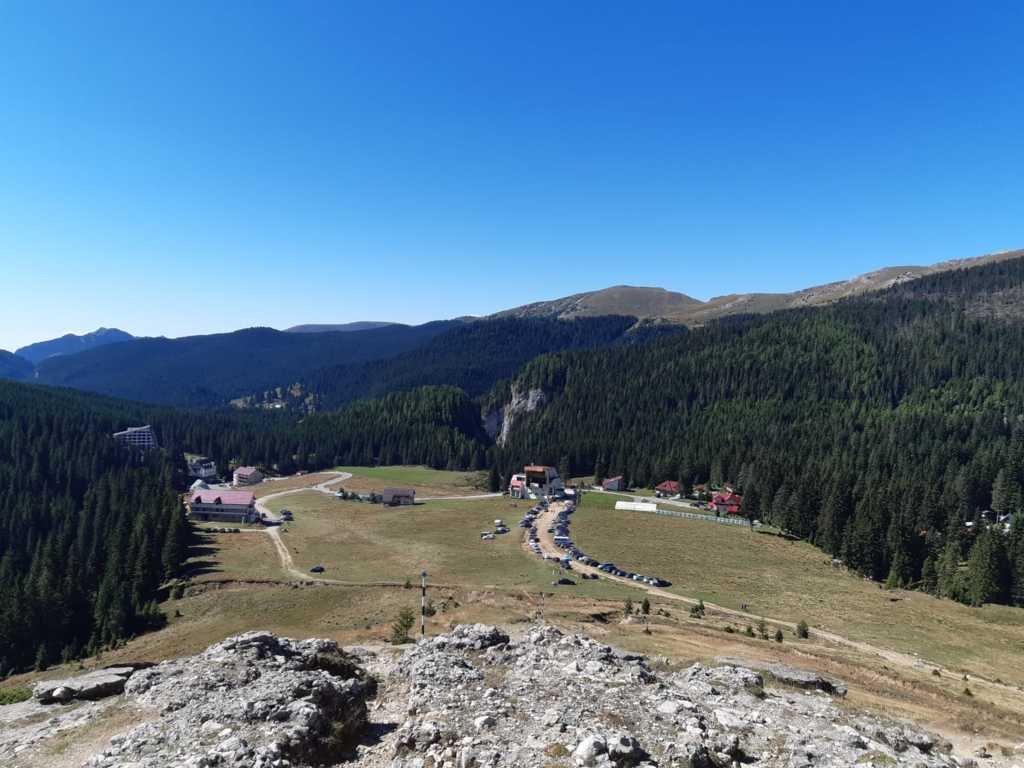 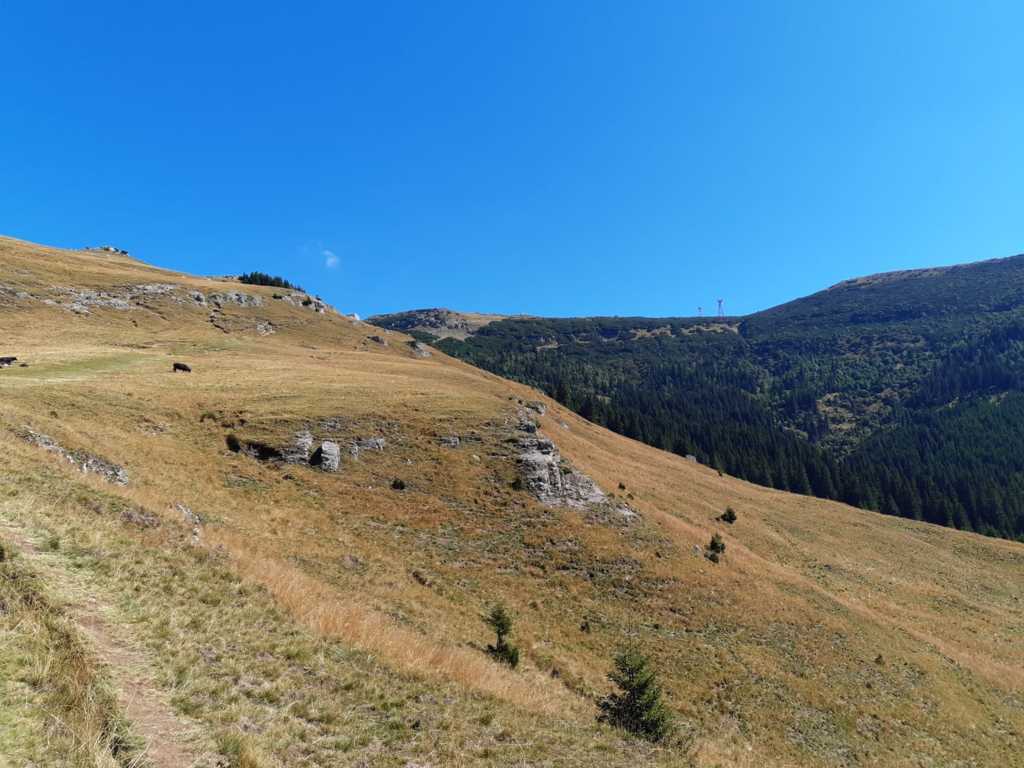 It starts right with a steep climbing that took my breath away (literally). Nothing scary for the advanced mountain enthusiasts, but for me, it was pretty tiring. It got milder afterwards, there are some meadows where you can probably see herds of cows or sheep. The landscape is amazing and makes you feel that all the effort is worth it, at least until you reach the base of a steep rocky area that seems to be the last hurdle you have to overcome before reaching the top of the plateau. 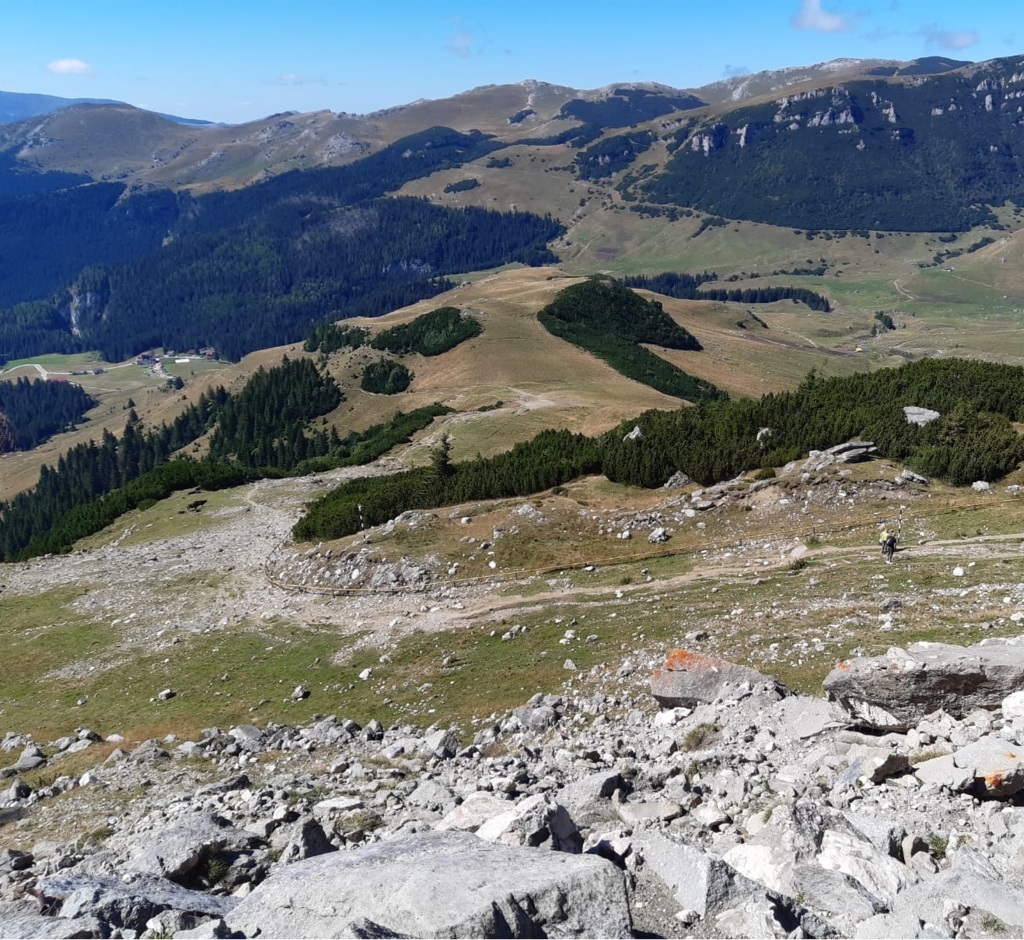 It was the most difficult part of the trail, the one where I regretted not taking the cable car. It seemed endless, but of course, it ended at some point and we finally made it to the Bucegi Plateau.

The Babele and the Sphinx are some natural rock formations in the Bucegi National Park and there are many legends wrapped around them. Honestly, I didn’t find anything spectacular in this, for me they are just some eroded rocks and this is why I didn’t even go to photograph the Sphinx. I preferred to sit on the grass for a few minutes and enjoy the scenery instead. 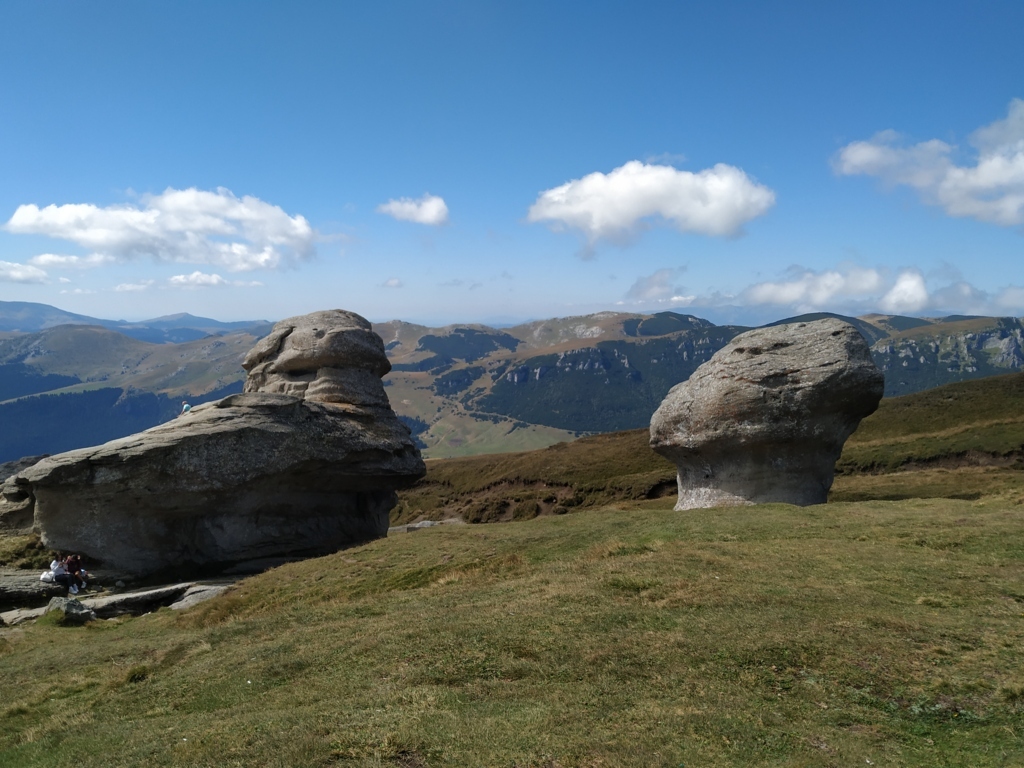 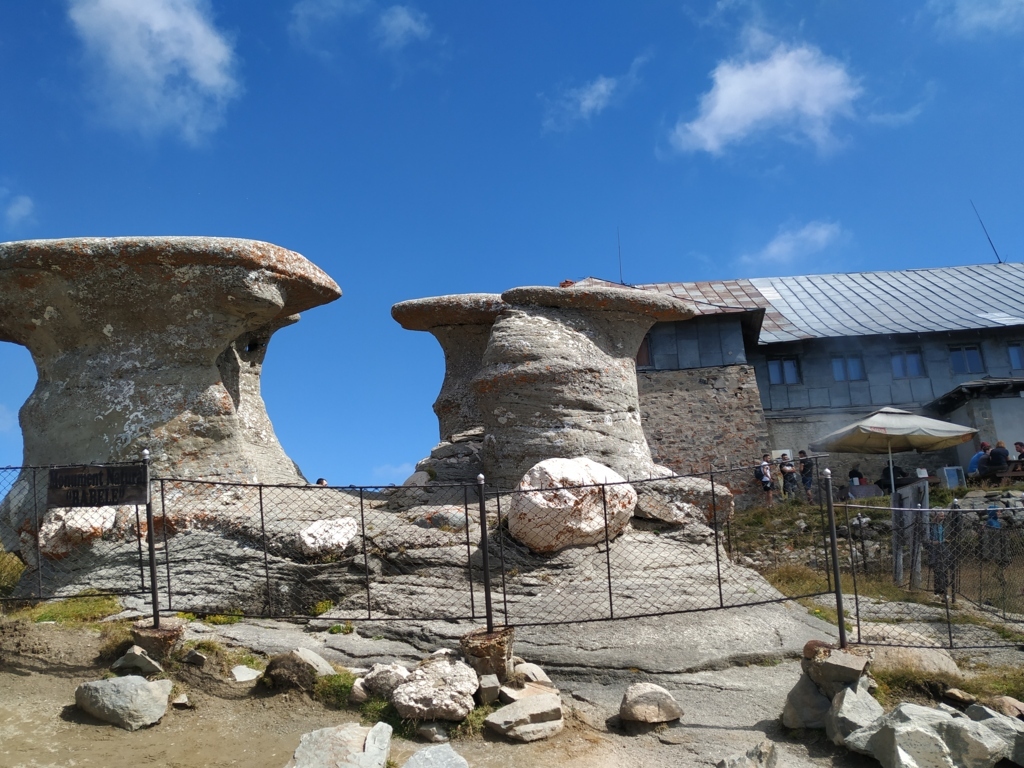 The Bucegi Plateau is the starting point for a few interesting trails, including Omu Peak and Heroes’ Cross on Caraiman Peak. The red cross marking leads to the Heroes’ Cross. It’s a hike of about 3 km and it takes about 1.5 h. Comparing with the trail from Peștera cable car to Babele, the one to the Cross is easy and enjoyable, with not too steep areas that require extra effort. We saw many tourists on the way, including children and seniors, so it is an accessible trail, especially if you arrive at Babele by cable car and you are not tired from previous hiking. 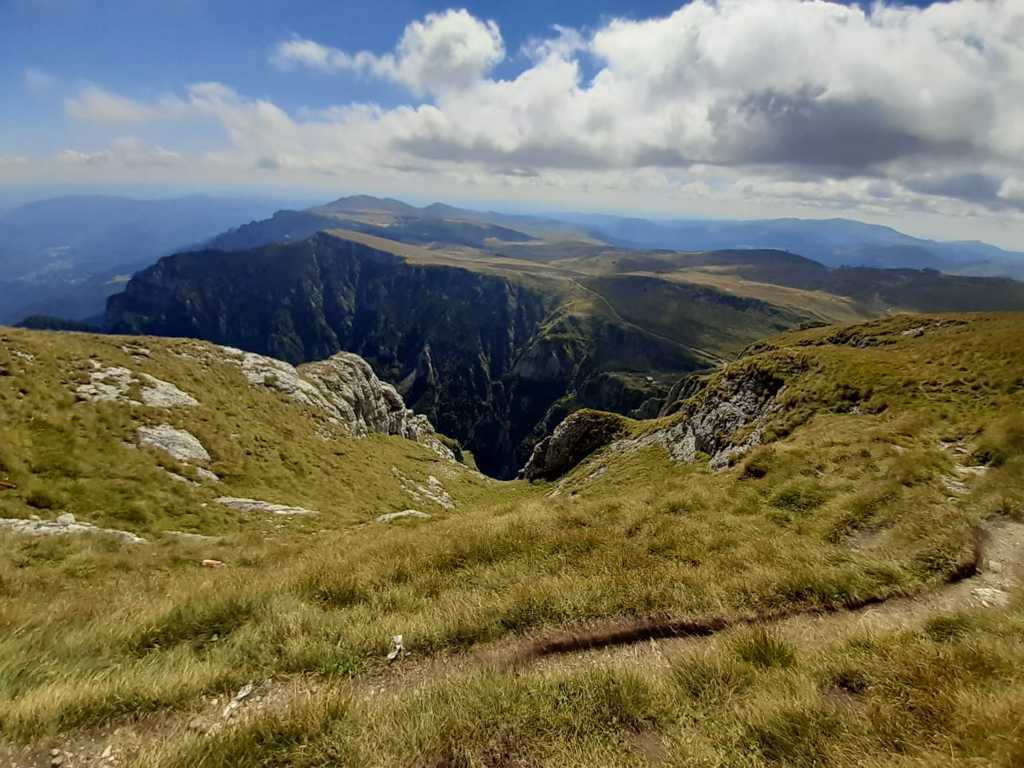 The landscape is absolutely fantastic! I would have liked to spend more time there, but since we had to return to the car and then back to Bucharest, we were a bit in a rush. 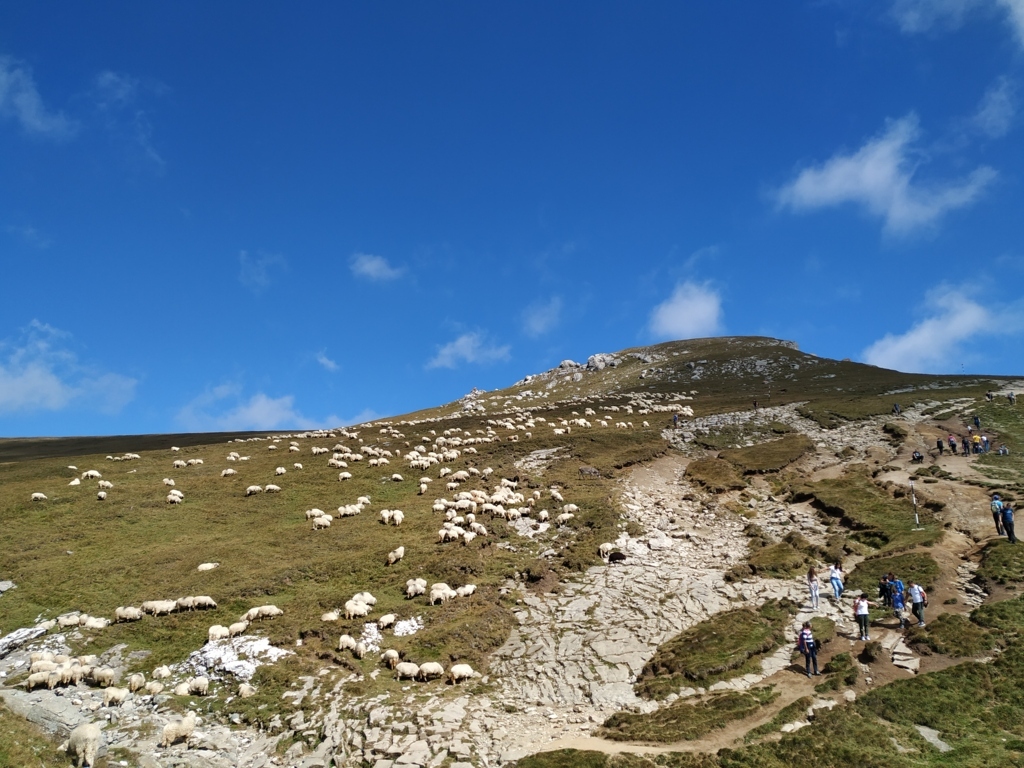 The Heroes’ Cross was built between 1926 and 1928, at the altitude of 2291 m, in memory of the Romanian heroes who died on duty in World War I. It has a height of 28 m and is the tallest summit cross situated at such an altitude. It feels awesome being there, above the cross, looking at the mountains around you and down at Bușteni. I was not feeling tired anymore, I was just very happy to be there and proud of myself that I did it. 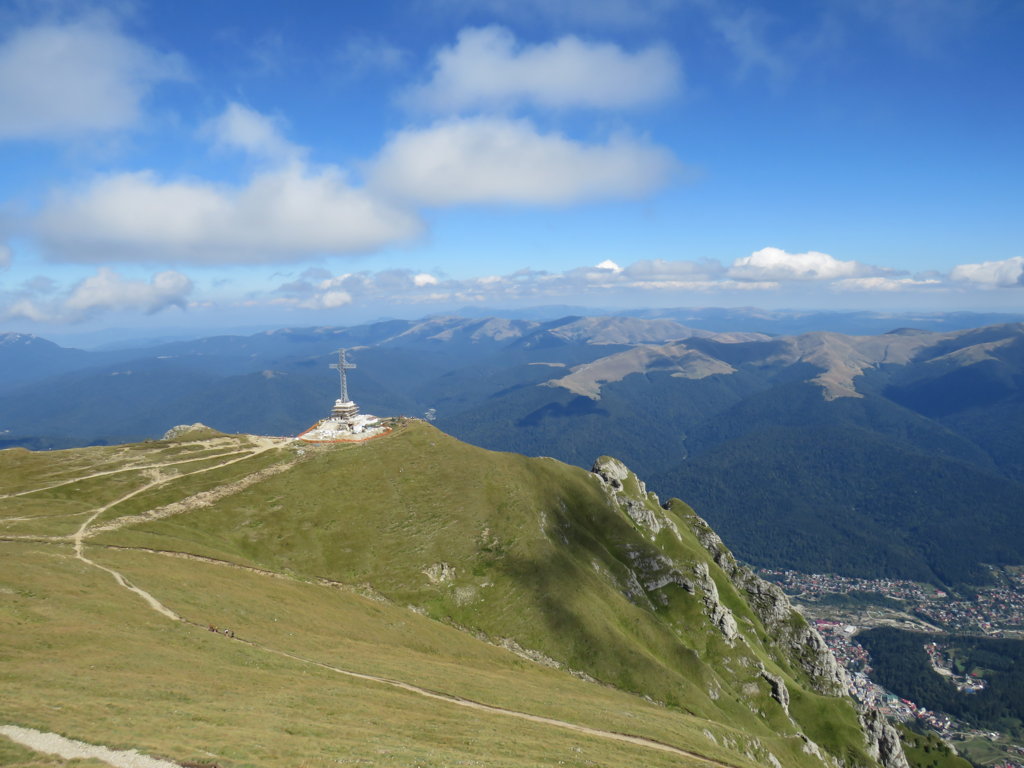 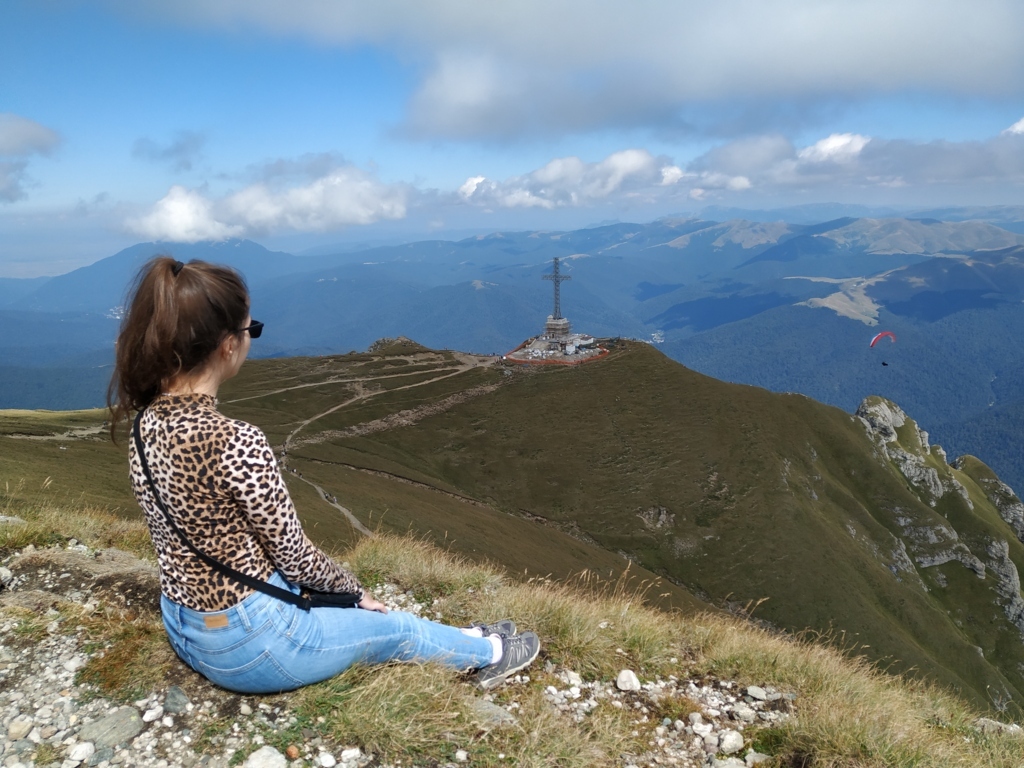 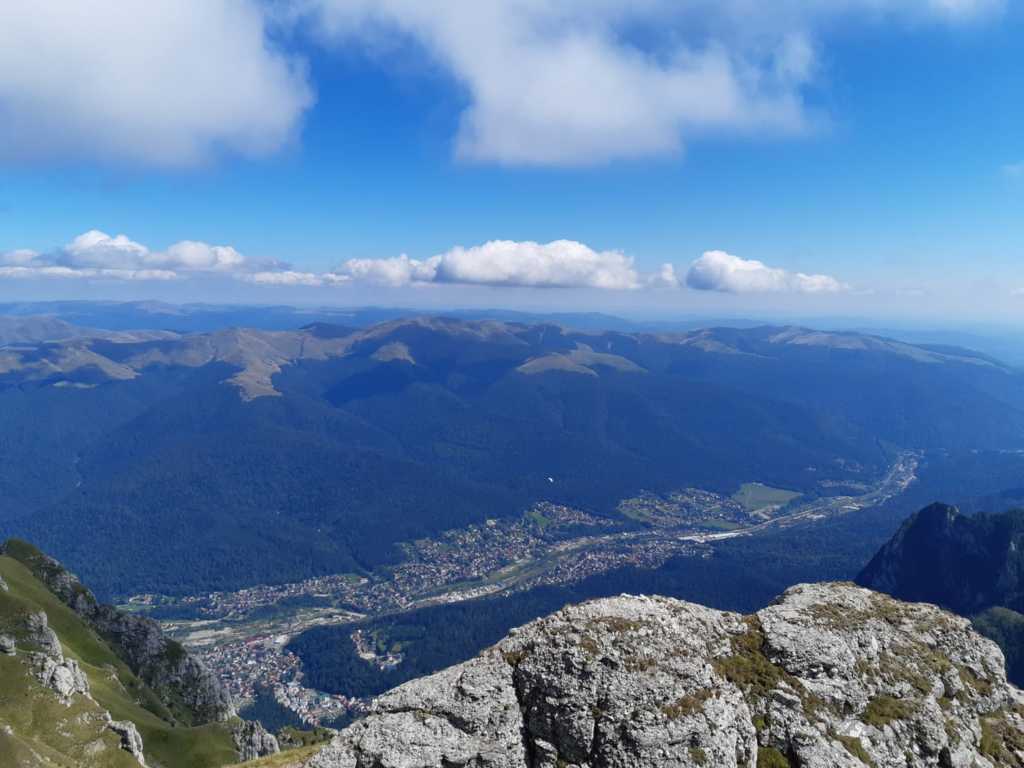 The way back to Babele took us around 45 min; it was way easier because we were descending. Then we took the cable car back to Peștera where we had left the car.

I must say that although these were among my first serious hiking experiences and I didn’t have the best physical condition or the best mountain equipment, I really enjoyed it and I want to do it again and try more difficult trails as well. I know that the Romanian mountains have so much to offer and I’ve had only a glimpse of it – this is why I am committed to see more and make the mountain my friend.